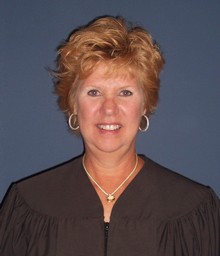 Judge Connie Zemmelman was appointed to the Bench by Governor Strickland in May 2007.  Before taking the bench, Judge Zemmelman built a private practice focusing on family issues, including juvenile law, adoption and surrogacy law, and probate law.  She developed a national reputation in the areas of adoption and surrogacy, and she received referrals from attorneys and agencies across the country.  While in practice, she was chosen by her colleagues as a Best Lawyer in America for her work in family-related areas in the law.

Judge Zemmelman received her bachelor’s degree from BGSU in 1976 and her law degree from UT in 1981.  Before taking the bench Judge Zemmelman spent 15 years practicing law, seven years as a staff attorney for the UT College of Law Legal Clinic, and three years as a Magistrate in the Lucas County Probate Court.

Judge Zemmelman is known for her extensive knowledge about human trafficking of juveniles; she helped write the Safe Harbor Act and has spoken nationally on the topic. She was chosen by the Ohio Supreme Court to attend a national 3-day conference on Juvenile Sex Trafficking, and was the keynote speaker for the Human Trafficking Awareness Day at the Statehouse in Columbus in January of 2016.  Further Judge Zemmelman is an active member of the Human Trafficking Coalition and Trauma Coalition in Toledo.

The Ohio Supreme Court also appointed Judge Zemmelman to serve on a multi-disciplinary Committee to address improving and expanding Family Drug Courts in our state. She presides over an adult Family Drug Court and is a member of the National Association of Drug Court Professionals.  She has also served on the Ohio Supreme Court’s Commission on Continuing Education.  She is very active in the community, has participated on the boards of several community and legal organizations, and has served as president of the Toledo Bar Association, the Lucas County Bar Association, the University of Toledo College of Law Alumni Affiliate, and Advocates for Basic Legal Equality.  In April 2016 Judge Zemmelman was honored by Advocates for Basic Legal Equality, Legal Aid of Western Ohio and Toledo Bar Association Pro Bono Program as a recipient of the Distinguished Service Award for Access to Justice.  On May 5, 2017 she was presented with the Distinguished Toledo Lawyer Award at the Toledo Bar Association’s Annual Law Day Luncheon.

Judge Zemmelman is married to Judge Norman Zemmelman (ret.) and they have one daughter, Rebecca, who is practicing law in Cincinnati, Ohio.